The weather forecasters have been warning us all week that a storm is heading our way and should reach the UK (exact destination unknown) late tonight/early Monday morning bringing with it hurricane force gales and rain. I remember the great storm of 1987 very well and had a terrible time trying to get home from Cardiff across the country from West to East back home to Kent due to the travel chaos that it caused.

So when someone tells me that a storm likened to the 1987 is going to hit, I take it seriously and when I got up this morning and spotted the clear blue sky and gorgeous late-autumn sunshine, I thought there is no better time to tidy up the garden and batten down the hatches ready for the onslaught.

Firstly however, I wanted to pick as many apples off my tree as possible so that they won’t go to waste when they are blown down. Once bruised, you cannot keep them over winter, and they have to be processed quickly. Whilst I am quite happy to do this, the more I can preserve without cooking and freezing just yet, the longer my apple stock will last.

In the increasingly strong breeze, I managed to pick another two large bags of fruit before running out of ladder, leaving some lovely plump apples frustratingly just out of reach. 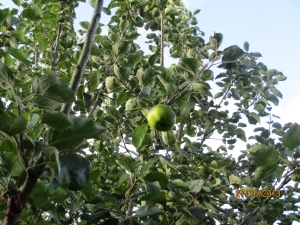 I even found some late raspberries hiding under the canes; Only a handful but a real treat in late October!

Some people I know hate leaf-raking in the autumn, a hateful job that never ends but I find it very therapeutic and, as I put the leaves in the compost to make worm-friendly leaf-mould over the winter months, I always feel it is a job worth doing. It’s quite sad that another summer is over, but whilst raking the dead vine leaves into piles I remember the lovely summer we have just had; the flowers, the grapes, berries, barbecues, picnics and hot summer days on holiday and look forward to next year when the bulbs I have just planted will show me that winter is over and spring is on its way.

It also reminds me that just a few weeks ago I wouldn’t have had the energy to rake leaves, pull up faded summer bedding and fill the compost and rubbish bins. My efforts at pacing myself at work and at home appear to be working and I feel much calmer and healthier for it. So I don’t get as much done as I would like but it’s a compromise worth the effort and there’s no better feeling than feeling better.

3 thoughts on “Batten down the hatches….”