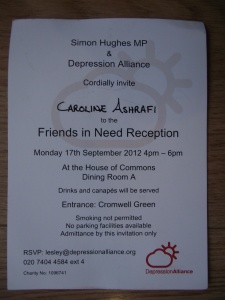 You’d have thought that a gathering of depressives and their supporters (not sure what to call a gathering of depressives?) would have been a rather sombre affair but you couldn’t have been more wrong. In fact, if you could have heard the increasing  volume of raucous laughter and jolity coming from Dining Room A, you may have been forgiven thinking it was a comedians party. But serious business was being done.

I was invited to the House of Commons yesterday as a guest of the Depression Alliance for a reception to celebrate the initial success of their Friend in Need Appeal. The appeal is raising much needed funds to help establish a new website service to help combat the loneliness that often accompanies mental illness.

It’s hoped the service, which will put people in touch with others living in their area, will be launched before the end of the year.

The funds are rocking and rolling in and the DA are spreading their wings to join with other charities and organisations in this quest to provide the support which everyone knows is one of the most potent weapons in your fight against depression and low mood-FRIENDS.

Alan Clayton kicked off the reception with a rousing, and at times, very moving speech about the importance of having good friends around you when things are not going well. As well as being blighted by depression himself he has been through the traumatic experience of his best friend committing suicide. At a time when maybe being a “Friend” would have made a difference, Alan listened to the 9 messages left on his answerphone asking him to call her but thinking that it could wait until morning, he went to bed. Sadly, whatever it was couldn’t wait until morning and by the time Alan made contact, his best friend was dead.

This is partly why Alan is so committed and passionate about this appeal and clearly knows first-hand why friends are such a vital element in the life of a depressive. But not everyone has friends and family support network to help them through. Many drift away, unable to cope with someone who has depression. It is hard being a friend to someone who has withdrawn, become a “different” person and it is often easier to walk away.

The Friends in Need initiative is about to address all these concerns and aims to provide everyone with a friend when most needed.

I wouldn’t be here today if I hadn’t had the support and understanding of my friends, family and colleagues; the patience and committment of the mental health professionals looking after me and yes, a sheer stubborn determination and fundamental belief that there is light at the end of the tunnel.

Not everyone has these advantages in their fight against depression so I am asking everyone to think about this initiative and spread the word.

And most importantly, make sure that your best friend doesn’t die friendless.

6 thoughts on “House of Commons”