We have two cats. Tessa, a lively and feisty three-year old black-and-white female and Tom, a typical relaxed and chilled ginger Tom cat . Tom came with two speeds, slow and stop and never breaks into so much as a trot until “foodie” time. Tom now weighs nearly 7kgs so is a “big” cat and our vet did warn us that ginger toms are prone to relaxing a little too much and gaining weight so we try to kick him out of the house (not literally) as much as possible so that he gets some exercise.

Having been ousted from his pad however, Tom will usually stroll out of the kitchen door and straight into the garage where he has his comfy seat on some of the outdoor furniture stored in the dry whilst this incessant rain continues. “You can lead a horse to water but you can’t make him drink” comes to mind.

Tom doesn’t roam far preferring surroundings that he knows and loves. Our garden is full of little trees and plants under which he can hide undetected and, with his selective hearing, ignore calls for him to come inside.

One thing Tom does adore, is catmint. I have grown some plants from seed and they are now big enough to plant out but I have a problem. Tom doesn’t just paw the leaves and roll in the bushes he eats them. I understand that sniffing the leaves gives cats a “high”, and may also be hallucinogenic (like LSD) whilst eating the leaves induces sleep. I may have found the reason he spends half his life asleep but I suspect that our neighbours have no catmint left!

My dilemma now is, where do I put the plants so that they can grow into big bushes? 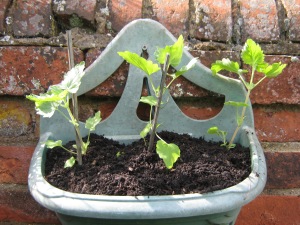 Sound idea, but I need to be a bit more imaginative with the placement………..

7 thoughts on “Catmint, cannabis for cats”