Thank you Nicolas for pointing out on this morning’s post that it is just as important to be kind to yourself as it is to be nice to other people in their battles with mental health issues, whatever they may be. Once again, the airline safety advice from the Civil Aviation Authority springs to mind, ” Passengers should also be given instructions regarding the automatic appearance of the masks and be advised to don their own oxygen mask before assisting others.”  So it is with help and support. You need to make sure that you look after yourself too.

Like a lot of people I am my own worst critic and I challenge anyone to tell me anything I didn’t already know. Being kind to others comes naturally but saying “No” is alien and being kind to myself, accepting my foibles and anything less than top-notch is not part of my make-up. Humour however always helps and when someone described my self critic as my “Inner Paxman” I had to laugh. How many times have I watched Jeremy Paxman interrogate his victims, relentlessly pursuing an answer, raising his eybrows (on its own enough to make grown men weep) and saying “Oh come on” in that awful disbelieving and disparaging manner of his? I sit and squirm in my seat and think “I’m so glad that’s not me” but actually in the end I take over the Paxman mantle and challenge myself  to the same degree.  I recognise a lot of me in Jeremy Paxman albeit I channel all of this aggression and persistence against myself not others and  I have to admit, I put myself under pressure needlessly. 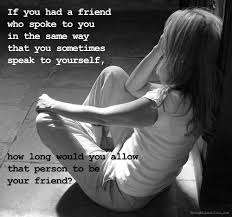 So, I have made a note to myself. Must be kinder to me and banish my “inner Paxman” to the wilderness.

I’ll let you know how I get on!