“Buzz Lightyear, Space Ranger and Toy Story star. I can’t think how many times over the last 15 years have I watched my son launch himself off his bed imitating his on-screen hero yelling ” To infinity…………and beyond!”  and hoping for a safe landing.

So, what happened to “Buzz” Aldrin, the real-life astronaut and second man to walk on the moon behind Neil Armstrong, and the man who inspired Disney to name their character after him.?

Buzzes Lightyear and Aldrin have more in common that you may think.

In Toy Story 1, Buzz’s attempt to fly out of a window results in him breaking off his left arm. Buzz then goes through a very dark period (especially for a children’s film) firstly having a nervous breakdown, followed by a bout of depression before the story continues to reach a happy conclusion.

Buzz Aldrin too suffered from bipolar disorder and alcoholism and at the age of forty-two, his US Air Force career was apparently curtailed when he was admitted for psychiatric treatment. It seems that nothing could match the experience of being launched into space and walking on the moon and he was left, like some of the other lunar astronauts in the 1960’s and 1970’s with a sense of despondency and thinking “What next?”.

Although Aldrin has achieved more in his lifetime than most, many think that his biggest challenges were fighting the depression and alcoholism, which blighted his life for a long while costing him his first wife and young family. I often think about this when I’m feeling sorry for myself, struggling to cope and putting everything on the “too difficult ” pile. If it’s not easy for a brave, heroic, strong astronaut like Buzz, then the mere fact that I’m still here and still battling on is quite an achievement and should not be underestimated. So hang on in there, dig in deep and in the words of Buzz’s mate Woody…..”REACH FOR THE SKY!” 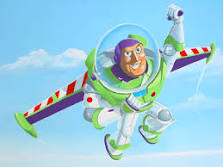