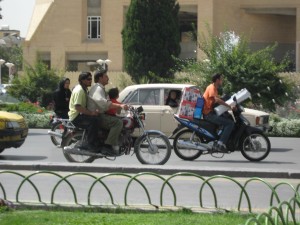 “Driving”?Well, no English dictionary definition of “driving”  bears any semblance to what occurs on Iranian roads. All I can say is that driving in Iran has to be seen to be believed. All those Motorway Cops programmes and Sweeney chases you see on UK TV are tame compared to everyday driving in Iran. At roundabouts for instance, there is no give way rule that I could identify. Instead, it’s first come, first served and it took me a while to catch on that instead of slowing down at roundabouts and junctions, drivers actually accelerate just in case someone beats them to it. Once we had performed a few of these sprints without incident I felt a little more comfortable and it became quite exciting. I guess a bit like a day at Alton Towers without the upside-down-feeling-sick-moments.

Some of the funniest sights were the motorcycles and their often curious-looking passengers and cargo. Even though it is compulsory, the majority of riders and their passengers don’t wear crash helmets, only wearing them in winter to keep warm. Cargo included baskets of washing, boxes of grapes and water melons carried precariously under one arm whilst steering with the other. Very skilful.

Remember Blue Peter in the 1970’s? Forget how many people you can crush in a mini to get an entry in the Guinness Book of Records, think instead how many can you balance on a motorbike whilst still it moves.  The most I saw on one bike was four adults but I am assured that it is quite common to see six.

As one motorcycle approached I saw that the rider had clearly been to fetch fresh bread from the bakery and was driving home with the bread piled up on the petrol tank in front of him. He was tearing pieces off to eat as he drove along one handed swerving to avoid the potholes, pedestrians and other vehicles. Forget using mobile phones, fresh bread is the real killer.

Strolling down pavements on a balmy evening taking in the local sights can also be alarming. Motorcycles treat pavements as their “hard-shoulder” and speed along “honking” you out of the way should you dare to wander down the middle of the pedestrian wayfare.

Cars, bikes and buses often drive both ways down a one-way street. This can be very disconcerting when trying to cross the road and you certainly cannot rely on a zebra crossing for safety. Our taxi driver drove the wrong way down a one-way street because “it was the quickest way into town”!

So, my advice?-don’t drive in Iran. Leave it to the experts.